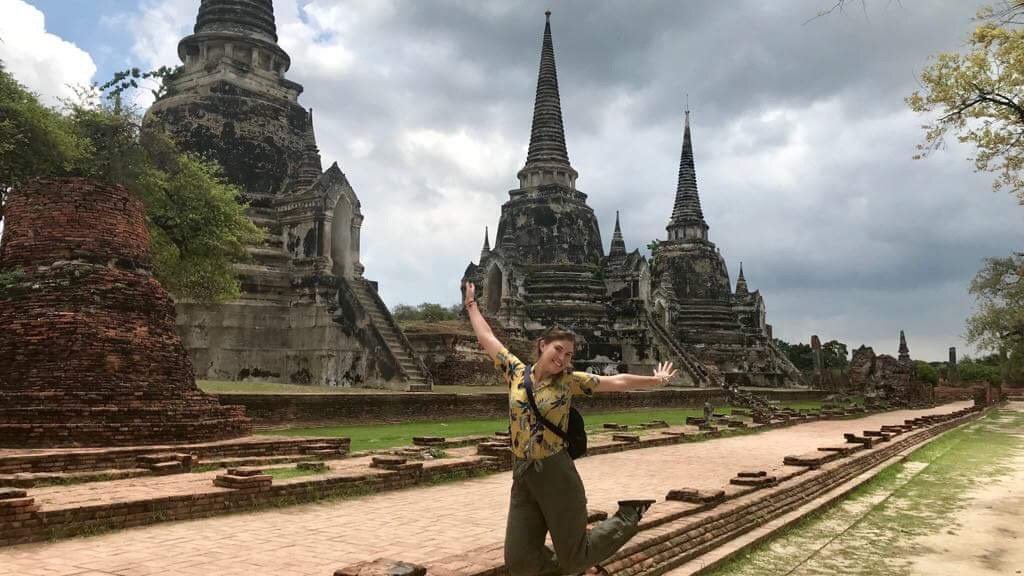 I arrived in Bangkok a week before the start date of my teaching orientation so that I could meet up with my friend in time for her birthday (also a teacher in Thailand). I figured I could also start to adjust to the time difference, acclimate to the heat and humidity, and explore some cultural sites before jumping into the school setting.

While Koh San Road is cool for party crowd, and Moon Bar (featured in the second Hangover movie) has a great view for a swanky birthday celebration, I didn’t find too much “authentic” exposure to Thai culture within the city. I was, however able to take two trips to the outskirts of Bangkok where I visited the Ayutthaya, floating markets, and the train market which were my favorite experiences from the week.

Ayutthaya is a UNESCO World Heritage Site that holds over a dozen temple ruins from the 14th century. We decided to make a day trip from Bangkok so we booked a Grab taxi (good option to avoid getting the ‘farang’ price) from our hostel to Bangkok’s Hualamphong Train Station. We wanted to make the train ride feel like part of the experience so we bought third class tickets for only 20 baht and stood in the aisle with no a/c for nearly two-hours to get there. When we arrived, we headed straight and quickly reached the ferry that took us across the river for 5 baht.

Since there are a dozen temples to see around the town, we rented bicycles at December House and pedaled our way to each of them. Being American and not used to the change in driving differences, I rode into oncoming traffic once thinking I was making a right-handed turn. Luckily my friends who were with me are from England and South Africa and they took the lead after that.

We rode to a majority of the ancient temples before grabbing a quick and cheap lunch from a grocery store and chicken stand, but it started to rain…and then pour…and then flood, so we entertained ourselves in the grocery store by sharing a gallon of some cookies and cream ice-cream and playing Categories for an hour and a half until it finally reduced to some light drizzle. There was no sign of it coming to a full stop and we didn’t want to wait any longer, so we bought some rain ponchos and headed back out on our bikes to see the remaining temples. Eventually we returned our bikes, took the ferry across the river again, and rode the train back to Bangkok.

It is important to keep in mind that women are expected to cover most of their chest, shoulders, and legs (down to the knee) in order to enter these ancient sites, just like most sacred places around Thailand.  There is also a higher fee for foreigners to enter each temple than for local Thai people but prices differ based on each site.

On a different day, we woke up early to be able to squeeze in both the floating markets as well as the famous train market. These are outside of Bangkok so we took a Grab taxi from our hostel to Bangkok Southern Bus Terminal. We had read that there are a lot of scams for foreigners and we were determined to navigate these markets on our own for a fraction of the price. We bought a bus ticket for around 60 baht and the drive took 40 minutes.

Only 40 minutes into our hopeful scam-free adventure, we accidentally fell for a scam. After the bus, we only saw one area offering motorboat rides so we hopped in one and paid a reasonable price for the ride…unfortunately the motorboat driver stopped alongside a floating building and a woman approached, telling us we each needed to pay 2,500 baht. We tried our haggling tactics and pretended like we were going to get out of the boat, but honestly, we weren’t sure what we would do after getting out since there weren’t any other options nearby so we bargained as much as we could and settled for 4,000 baht total for the three of us, which was still more than we knew we should pay. Luckily, we had an amazing time, went to two different floating markets, and were dropped off near the train market.

I have a severe peanut allergy and am always cautious of ordering food in Thailand but I was able to enjoy some coconut ice cream from one of the floating market vendors (minus the usual topping of peanuts) worry-free! I must admit that although the experience was great, there are a lot of shops and restaurants constantly trying to get your attention to sell you tourist crap or Pad Thai which was a bit annoying to have to ignore the entire time. The first floating market was Damnoen Saduak and it was the least authentic. The second was Amphawa and although it wasn’t as lively, it definitely was less crowded and touristy, so I am glad we got to experience both.

Our motorboat guide dropped us off near Maeklong Train Station. This train station is unique because an active train runs through the middle of a market that is set up along its tracks. We walked along the railroad tracks until we found a suitable place for lunch. We shared some mango sticky rice and a common Thai dish of ground pork and basil with rice. After checking the train schedule, we learned that we only had to wait 20 minutes before the next train would pass. Our lunch café was situated directly beside the train tracks so we stayed at our table and waited for the show.

About 10 minutes before the train arrival, a bell begins to ding, vendors with food and items on the tracks slowly started to rearrange, close their umbrellas, and move their things out of the trains’ way.  The whole process seemed a lot slower than I had imagined. I was surprised to see that vendors left certain items on the ground that were short enough to fit under the train. Sure enough, the train slowly rolled by and when it had passed, the vendors restored their things to the pre-train setup and the market resumed.  We walked around the town but didn’t find much else to see, so we caught a van back to Bangkok and called it a successful day. 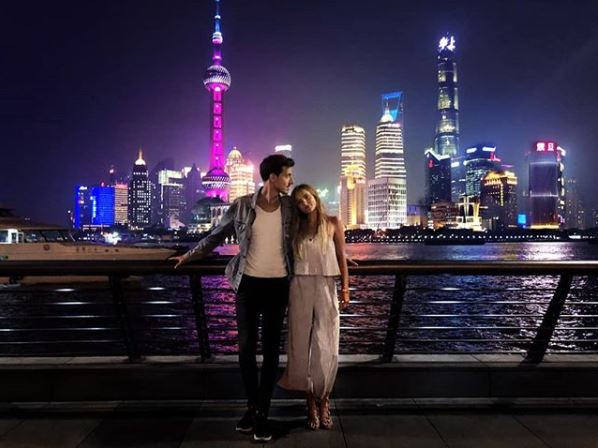 Not only is Shanghai a happening and exciting place to be, it is also super convenient! Do you know that you don’t need a wallet in Shanghai! You can shop almost anywhere with your smartphone. Here are 5 ways in which Shanghai is the most convenient place to live.

Paying for everything using your phone

Shanghai is an (almost) cashless city. The vast majority of people will pay for everything using e-wallets on their smart phones and everywhere will accept this form of payment. Even street beggars come with their own QR codes, I kid you not! The most popular e-wallets here in China are WeChat Pay and Alipay. Both of these come with an English interface making them great for us non-Chinese speakers. I am from the UK where this type of payment isn’t really used, but I am certainly converted. It’s great not having to carry my purse, and transferring money to friends is so easy. You can also pay your phone and utilities bills directly from your phone.

The Shanghai metro makes getting around the giant metropolis that is Shanghai easy and convenient. The metro is really extensive and covers most of the city, including the two airports and some far-out suburbs and towns. You can even use it to get to some beautiful Shanghai day trip destinations, such as the stunning Zhujiajiao water village. It can get pretty crowded at rush hour (think tinned sardines) and sweltering in the summer, but overall it’s a great and cheap way to get around town.

There can’t be anywhere in the world that does food delivery like they do in China’s cities. It is absolutely mind blowing the amount of food that gets delivered around Shanghai everyday. Once you get set up with the right apps and work out what your address is in Chinese, you will have a vast network of restaurants and cuisines to choose from. There is even an English food delivery app called Sherpa’s just for expats! Meituan and Elema are the favourite Chinese apps. These are fun to use if you don’t know Chinese as you will have to use the pictures to work out what you are ordering. They are also cheaper.

Didi means little brother in Mandarin. It is China’s answer to Uber and it is just as easy and convenient as Uber is at home. There is an English version of the app which even translates messages between you and the driver, so no need to worry about the language barrier. The fares are generally pretty cheap which makes it a great way to get around, and perfect for late at night when the metro has stopped running for the day. Or if you just feel super lazy and don’t want to take the metro to work.

I have been teaching English in Shanghai for around 8 months now and this city never stops growing and never stops surprising me! Considering teaching in China? Then Shanghai is the city you can’t miss.