I moved to Beijing to teach English since Jan, 2017 and one of the most challenging parts of moving to a new country is finding a place to live, especially if you don’t speak the language. Beyond that, some cities and countries have different customs when it comes to paying rent than what is common in the USA. In the United States, it is customary to pay a deposit equal to one month’s rent as well as the first month’s rent. Often, you will be expected to pay last month’s rent as well, so the equivalent of about 3 months up front.

Of course, I wasn’t aware of that when I first moved which caused a lot of anxiety when I first got to China.  I wasn’t sure I had enough money since it would be a little over a month before I received my first pay check. As it turned out, there are landlords that are willing to be flexible, but you have to hunt for them.

Agents can be helpful with that if you are willing to pay the agency fee, which my new roommate and I opted to do as we found more agents able to speak some English than landlords. We got very lucky that some agents were willing to postpone payment for the agency fee and found us landlords who were willing to be paid on a monthly basis. This may have been because it was close to Chinese New Year, and agents were desperate to get their commissions before rental prices rose again, but either way, it was helpful to us.

Helpful Agents Are a Blessing

The agents that we ended up getting a lease with were wonderful. They found us a few places within our price range and spent the day taking us around the neighborhood to see them. This was made a lot more exciting by the fact that they took us around the city on their motorbikes, which allowed us a chance to see the neighborhoods in a way we wouldn’t have just riding the subway. I wish I had had a Go-Pro camera to record the motorbike trip as it was the highlight of apartment hunting, but I do have some good pictures of the neighborhood we settled in. 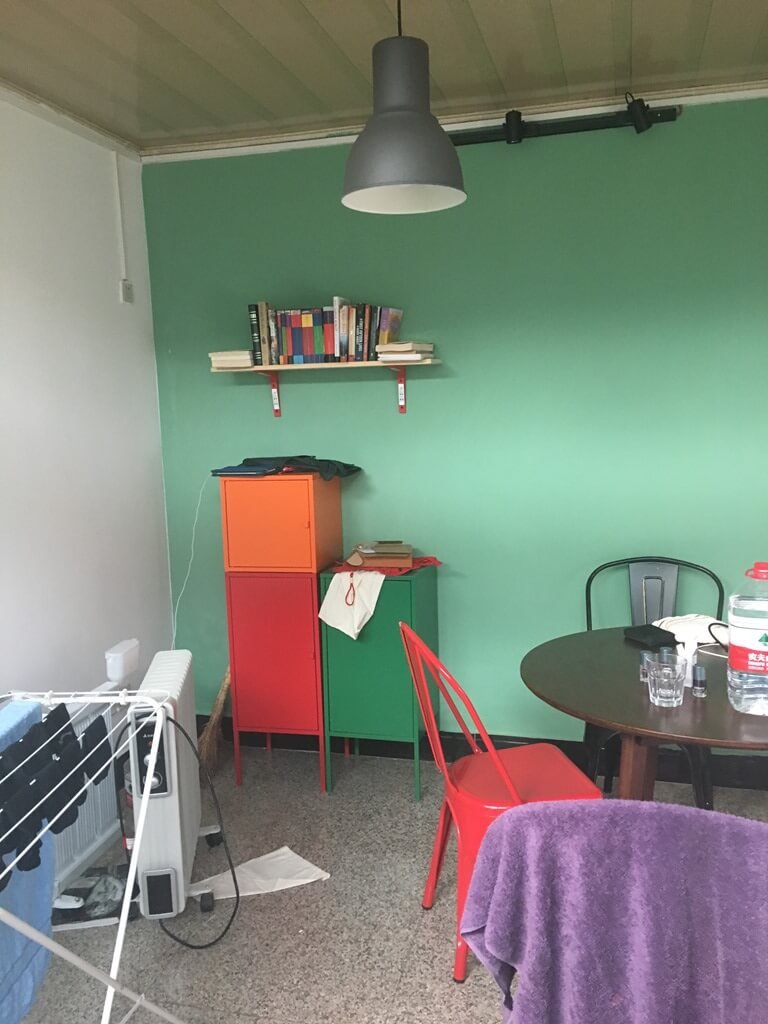 They showed us two apartments and one traditional style Chinese hutong, all within the same price range. We ended up deciding on the hutong as it was the best commuting distance to both of our centers (about an hour each with public transportation, which in Beijing is about as good as you can expect), and the landlord dropped the price from 8,000 RMB a month to 7,500 RMB. It’s a cute and comfortable little place that we’re happy with, even with the lack of a proper couch. The previous tenant also left behind several useful things, like our shoe rack, food shelves, cubbies, and a full set of Harry Potter books for our enjoyment!

It took a few days to get completely settled in, and after a few months I can say I probably won’t want to live in this apartment forever, but it will be comfortable enough for one year. If I decide to stay in China longer, I now know I will have to save up enough money to pay up to five month’s rent in advance, and then I will have more options open to me. However, I do really like the area that I live in, as there are lots of places to eat and there are not as many skyscrapers so it does not feel so metropolitan all the time. As much as I enjoy big city living, I like that my apartment and neighborhood allows me to feel like I am actually living abroad, rather than in just any other large city.

Finding Your Way and People in a Foreign Land

Hear from Our Teacher in China - Amber Rollins

3 Things to do After Arriving in Japan