Finding Your Way in Bangkok, Thailand

Bangkok, Thailand’s capital, is a large city known for ornate shrines and vibrant street life. Bangkok is one of the world’s top tourist destination cities. MasterCard ranked Bangkok as the top destination city by international visitor arrivals in its Global Destination Cities Index 2016, ahead of London with more than 21 million overnight visitors. When you are teaching in Thailand or traveling in Thailand, you definitely need to know how to get around the city. Fortunately, it is very easy and there are several ways of transportation you can use in the city.

It is extremely easy to get around the central city of Bangkok for the most part. The city offers a wide selection of transportation options, and the two main forms of public transportation can get you to most of the major areas, but sadly not the bulk of the main attractions that Bangkok has to offer. The public transportation that exists in Bangkok is basically the same as any other major city: trains and buses. Luckily there is also a third option, taking a nice breezy boat ride. As for non-public modes of transportation, there are cars, bikes and boat taxis, ride apps such as Uber and Grab, private cars or vans, and the famous tuk-tuks. 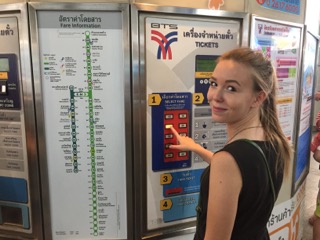 The BTS (Bangkok Train System) also known as the Sky Train, is the fastest, most convenient, and most popular way to get around Bangkok. The BTS is comprised of two train lines, Siam and Sukhumvit. The other train system is the MRT (Metropolitan Rapid Transit), which is basically a subway system. These two train systems cover most of the city, and make it much easier to get to your destination. Both of these train systems offer clean and air-conditioned train cars, though sometimes the air-conditioning can be a bit too much, I’d recommend having a light sweater at your convenience. During rush hour the trains can become… a ‘bit’ crowded, and your personal space will definitely be invaded. 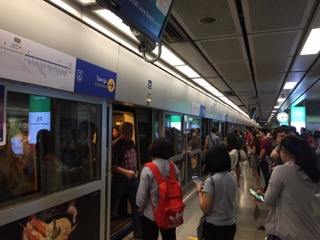 Most of the BTS or MRT stations that are located centrally will have malls or markets located right outside, where you can eat and shop till you drop. The only downside to the BTS and MRT, is that neither of them can take you to the cultural centre of the city, where you will find many of the main attractions such as; The Grand Palace, Wat Pho, Wat Arun, Wat Phra Chetuphon, China Town, or the backpacker street of Khao San Road. As for fare prices, it varies depending on the length of your trip. The fare for one stop is around 15 baht, but can go as high as 60 baht for longer trips. You can also buy transit cards, which are prepaid electronic cards, they cost around 750 baht for 25 rides or 1,100 baht for 40 rides. Depending on your usual length of travel, these might not be worth your while if you only travel a couple stops every day.

Hop On A Bus

Buses are definitely one of the cheaper ways to get around the city, but are my least favourite. They are usually late or never come, and are bumpy, hot and cramped. And worst of all, the buses are the only form of public transportation that fall victim to the atrocity of Bangkok’s infamous traffic. I will avoid taking the bus as much as I possibly can.

Go With The Flow 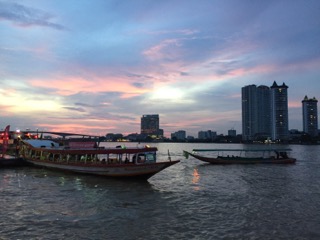 Though there are public boats you can take in Bangkok, they aren’t located everywhere throughout the city, and are obviously limited to where they can take you. The main boat route is located on the Chao Phraya River, the largest river that runs through Bangkok. There are many public boats that you can hop on that will take you up, down, or across the Chao Phraya River. When taking a boat on the Chao Phraya, make sure to find the local public boats, which is exponentially cheaper than the tourist public boat. There are also some other water routes throughout the city that go down smaller waterways known as Klongs.