If you have never been to Moscow before, and haven’t had a chance to travel around this fascinating city, teaching English in Russia is a great way for you to experience Russia like never before.  Russia, the biggest nation in terms of land has so much to offer.  While teaching English in Russia, you will see main tourists attractions; the Red Square, Alexander Garden, the Big Theater, the Garden Ring road, Moscow City business center (with the view point), Krasnopresnenskaya river walk, Old & New Arbat streets, and charming streets of old Moscow.

There are more than 100 parks in Moscow. Some of them are historically important, some are brand-new. Parks have always attracted lots of people. These are the islands of calmness, peacefulness and relaxation. We want to show you parks of real historical importance, parks that used to be the residence of tsars and queens. You will be able to touch the Russian history starting from the 16th century. Our excursion includes Sokol’niki park, Izmaylovo park, Tsarizino residence, and Gorky park.

If you are a history lover – you are welcome to our walking subway excursion. Moscow metro is not very old, but it amazes by its architectural design, creativity and authenticity. Opened in 1935 with one 11-kilometre (6.8 ml) line and 13 stations, it was the first underground railway system in the Soviet Union. In 2015, the Moscow Metro is about 200 stations and its route length is about 330 km (203.5 ml).

Moscow city center has a lot of time-honored sights. All of them are unique and all of them were built for particular purposes. During this excursion you will learn about historically important streets and constructions of Moscow. One of them is Kitay-Gorod Wall which was erected in 1539 and nowadays we can see only a little part of it that has endured through all these years. We will walk along narrow lanes, speak about history and enjoy the picturesque view.
​
The most ambitious in the history of Moscow project to build a high-rise business center was conceived by the authorities in the early 90th and was seen by many people as an impossible dream. At the present moment, about 25 high-rise buildings were built on the area over 60 hectares. During the tour we will tell you about the value of such a big project for the city of Moscow, difficulties that arose during construction, and, of course, we will visit the towers of the business district.

For more than five hundred years the Moscow Kremlin wall has been rising above the capital, preserving secrets of kings, emperors and high rank officers. During our tour, you will get answers to the questions on which of the towers is the oldest, which one is the highest, and which tower is considered the most beautiful, you will learn about secret architectural plans, such as an underground passage to the river and about other ideas, which had never been implemented.

Russia still continues to have a huge demand for quality English teachers. We aim to find the best English teaching instructors to help Russian students and businessmen build a better career, or simply just start a better life in Russia. Teaching English in Russia with On the Mark will open your eyes to a great new world that awaits you.

Looking for English Teaching Jobs in Russia? Check out our Russia Job Board. 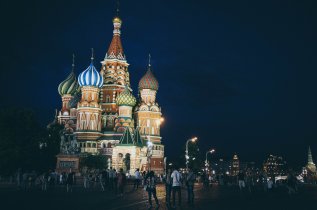